As it has for more than five decades, El Gato Tuerto (The One-Eyed Cat) looks down from its altitude toward the sea, justly proud that, as a popular nightclub, it has maintained its bohemian existence in the heart of Havana´s Vedado neighbourhood.

Opened on August 31, 1960, the Gato began as a concert café with the reading and selling of books, music and works of art together with a nice meal. Felito Ayón, cultural promoter and designer as well as founder of the Bodeguita del Medio restaurant in old Havana, conceived the interior with sleek lines and walls painted in black, adding a bar and a small platform for troubadours, pianists, singers and artists from and artistic manifestation to "jam".

Sometime after it’s refurbishing in the 1990’s the Longest Bolero (slow tempo Cuban music) of the World was organized: 76 hours of non-stop music. It was one of the many Guinness records achieved on the island.

Currently the Gato’s artistic values lean toward promotion of arts in Cuba. There is an exhibition by painters Nelson Domínguez and Zaida del Río, as well as a photographic mural of many of the figures who have honoured the club with their presence. Among them are Nobel prizewinner Gabriel García Marquez from Colombia, popular Puerto Rican singer Cheo Feliciano and three Cuban writers of universal stature: Virgilio Piñera, Pablo Armando Fernández and Miguel Barnet.

Jamming still has its special place, in competition with the delicious culinary options, like the Olla del Diablo (Devil’s Pot) the original dish prepared by chef Ricardo Curbelo, or with the signature cocktail, Orgasmo del Gato (Cat’s Orgasm), with which clients toast the start of the evening at the Concert Café.

These days one of the greatest delights is the show by Cuban cabaret diva Juana Bacallao who, with her racy and humorous songs, gives life to Piñera’s poem: “One night within the night / with a moon that rises for some / and a sun shining for others / and a happiness / at the Gato Tuerto.” 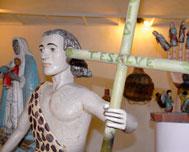