Matanzas, capital of romanticism and culture

Latin American Cinema: Once again the great date in Havana

Blue Diamond Resorts continues to expand its operations in Cuba

Varadero boulevard, options for every taste

Inaugurated on January 28, 1925, the José Martí Museum in Havana is home to the world’s most important collection of items relating to the life and work of Cuba’s “Apostle” and national hero.

The construction of the Atarés castle, on Soto hill behind Havana bay began following the storming of Havana by the English in 1762.

Text and photos by Heidi Hollinger

Canadian Prime Minister Justin Trudeau visits Havana 40 years after his father Pierre Elliot Trudeau’s historic state visit in 1976 when he became the first NATO country leader to call on the island since the 1959 Revolution.

Lovers of the renowned Cuban cigar brand have a yearly opportunity to gather in the Cuban capital to take part in an exclusive event where they can enjoy the island’s famous tobacco and discover its tobacco plantations among other activities.

The Bridges of the City of Matanzas

With the recent celebrations for the centenary of the Silverio Sánchez Figueras Bridge, the western Cuban city of Matanzas now has five bridges that are more than 100 years old, something unique in Cuba and the Americas.

We found this dessert in Paradiso (Paradise in English), novel of the great Cuban writer José Lezama Lima. One of its chapters describes the menu of a family supper, where Lady Augusta, the main character’s grandmother, enjoys herself and gives a touch of originality and simplicity to the meal with a crema helada (iced cream).

The Best Smokers Party on the Globe

Text and Photos by Roberto Campos

Each year in late February, smokers of premium cigars party in the Cuban capital to celebrate the Cigar Festival, an event already among the most important of its type in the world. The 2009 celebration, from February 23 to 27, is the 11th edition and, as always, some surprises are reserved until the last moment.

Text and photos by Jerome Mix

One of the most renowned brands in the world of Cuban cigars, Partagás, celebrated the 15th anniversary of its Cigar House and the 17th of its Friends Meeting with great fanfare.

Not only tourists sit beside John Lennon on a park bench in Havana's Vedado section to enjoy the sun (and often the moon) in this Caribbean country. Lennon continues popular here and the people of Havana are grateful to the sculptor who created this life-size statue that has become a rather must-see tourist attraction.

By Mercedes Ramos / Photos by the artist

To Ernesto Milanés, artist lately turned artisan, an interest in cigars fostered his making of beautiful humidors, true masterpieces having the virtue of preserving cigars in optimal shape for smokers.

Recognized for his wisdom and love for the tobacco leaf, Alejandro Robaina, considered the best tobacco grower in Cuba, arrives at his 90th birthday.

The recent proclamation of Havana's historic aqueduct system, considered one of the seven wonders of Cuban engineering, as a National Monument, placed the work of engineer Francisco de Albear in its rightful spot. The decision of Cuba's National Monument Commission includes the first major hydraulic project by Spaniards in the New World: the Zanja Real, begun in 1566 to bring the waters of the Almendares River to the Bay of Havana. 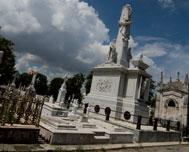 The downtown Vedado neighbourhood of Havana possesses the Colon Cemetery, named for Christopher Columbus and declared a National Heritage Monument in 1987 for its wealth of sculpture.

Time never seems to pass by Havana's streets. Not only in his colonial architecture or in its urban layout, it also happens in the rescue of centennial traditions shaping the old city. Like a magical touch there is also the presence of a creative, inherited and intentionally reborn art amalgamating different cultures.