At a very young age his father led him by the hand into the secrets of making beauty from clay. Today artisan Fernando Velázquez Torres is admired for his expertise in combining ceramics and painting in medium and large scale creations, with flora, fauna and human experiences as predominant motifs.

Son of Fernando Velázquez Vigil (1950 - 2002), considered an icon of late 20th century Cuban artistic pottery, Velázquez began working 15 years ago with jars and other useful items. He then on moved on, with considerable artistic skill, to larger pieces such as tables, benches, chairs and jardinières.

Interviewed by Cubaplus, the artist said he took a new step three years ago by experimenting with what he calls ceramic art paintings, a mixed media using canvas, ceramics, acrylic and other elements in his current creative work.

A sample of Fernando Velazquez’s works will be exhibited in the Hotel Nacional in December in a personal exhibition Condenados al silencio (Condemned to silence), which deals with loneliness, estrangement and separation. The young artist has participated in fairs and galleries in Cuba, Switzerland, Spain, United States, Uruguay, Qatar and recently in the International Contemporary Art Fair in Martinique, and is planning to attend Havana’s International Craft Fair (FIART) in December and, next year, the Biennial of Visual Arts in Havana. Among his international commitments there are several exhibitions planned in New York City.

Awarded in FIART’s 12th edition in 2008 for the quality of his work, and winner of the second prize at the La Vasija Ceramics Biennial in Havana’s historic center, Velázquez takes some time for other occupations unrelated to the field of art. One such is the development of a community project in his home Havana district of Marianao, to improve the behaviour of those who have spent time in prison. He is also part of other projects undertaken by a group of artists in several areas of the capital dedicated to improving the general environment of Havana.

Specialists assert that the work of Velazquez, with its fullness of ochre, black and fuchsia, with barely any blues and greens, off ers a peacefully radiant atmosphere with direct and honest expressive character revealing his attachment to his land and sea, as well as to human experiences. 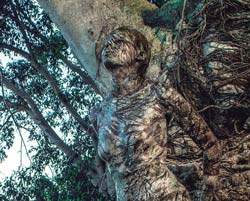 Alexis Plasencia. The body is a temple... the temple is the art