José Luis Fariñas (Havana, 1972) is a graduate of the San Alejandro Academy of Plastic Arts and studied at the University of Art, in Havana, from 1991 until 1995. He has held more than thirty personal exhibitions and participated in 140 collective ones both nationally and internationally.

Critics and fans agree that once one sees a Fariñas drawing, it is very difficult to forget for its “delicate precision and technical skill”, its “extraordinary imagination”, “its meticulousness and expressiveness up to its most intimate detail” and the “transparent and soft tonalities”. The artist speaks to Cubaplus from his own perspective:

Who is José Luis Fariñas? When did you start being interested in art?
As Emily Dickinson said: I am nobody too. Art came to me at home, through the music of Bach, Mozart, Brouwer and Silvio; through readings of Fausto by Goethe; the vision of Venus of Milo, the Hunters in the Snow by Brüeguel, Goya´s aqua fortis, Chris Marker´s photo of Nefertiti´s breast, Van Gogh’s Starry Night and Rodin´s Cathedral; these among other powerful works is the art that came to me, through my mother, writer Juana García Abás. I now see the beginning of my musical, literary and plastic art studies as a magical, protective initiation towards something waiting to awaken in me.

What do you think of when you are facing the canvas?
I try to reveal a series of hidden confluences, and through my art work I try to humbly allude to moments of metamorphosis. Paul Klee´s affirmation that drawing and any true art is the art of omission, is a precise way of bringing to light a non-artificial, essential and responsible process. As such it is necessary to manipulate the exposed forms like cutting through a veil of fog so that what is unseen suggests a certain complexity.

Does any of your work come in series? If you had to do a quick analysis of the stages you have gone through, what would it be?
I often resort to series as a creative strategy, a way of reworking a musical theme through painting, using successive transformations, a series of visual modules of both closed and open topics. I have always liked to sum my work up into cycles, a type of Book of Changes, describing an internal journey across my own concept of totality. To try to break my work up into stages is difficult because I conceive art as permanent learning. I prefer that the pieces themselves reveal the part of the tree to which they belong.

What are your favourite subjects?
Awakening, confluences, sleep and death, in other words, existence.

Which would you say is the most distinctive feature of your work?
A dense integration of space, lines, colors, figures and abstract volumes, through the successive metamorphosis of the parts integrated in a dynamic symbiosis of the whole.

How do you want to be defined?

I am not interested in classifications, although these could somehow influence contemporary perception of one´s work. Every artist wants to give life to an undying emotion through his creations, foreign to categorizations.

What artists have influenced your work?
First and foremost, my mother and her heuristics. From childhood on and still today I have enjoyed and learned from the works of the following artists, without order of priority: Goya, Leonardo, Dürer, Doré, Brüeguel, Bosch, Antonia Eiriz, Servando Cabrera, Rembrandt, Munch, Van Gogh, Rodin, Hiroshigue, Carlos Enríquez, Milián, Fabelo, Posada (the Galician), Egyptian and Greek art, Bach, Kafka, Hesse, Brouwer, Silvio, Beethoven, Goethe, Martí and Lezama, my mother´s poetry, Kawabata and Borges, among others.

What level of importance do drawing and color have in your work?
If we consider the drawing to be the soul of the painting, then color would be the body. In my work, the drawing is central, as it was for Boticelli and also for Dürer. Nevertheless, the technique that I consider to be the basis of my career is watercolor, an eminently pictorial skill. When we talk about these elements, be it color in “pure” painting, and the line in “pure” drawing, it may seem that we´re talking about different worlds, but we are actually speaking of one universe. A painter cannot separate a drawing from its color if he wants to recreate even the simplest and evasive of fantasies.

How much space does experimenting occupy in your work?
Somehow on having always created, an unlimited alchemy is experienced. If by experimenting we understand that it is the base for learning, then I am always experimenting; however, I do fully agree with Tarkovski in that true art is never an experiment but an earned result, a mature gesture.

Other supports?
Oil on linen or wood, oil pastel on canvas or kraft paper and ink on cardboard, silk, and rice paper, among others.

Does any contradiction exist between the painter, the illustrator and the writer?
There is always contradiction in any physical or spiritual activity that we choose. I have felt these double expressive urgencies from early on so it is difficult for me to feel a contradiction that could present a limitation; nevertheless, Kafka said that the lightest progress in his night creation was equivalent to a disaster in his day profession, and vice versa. In a certain way, this often happens in the creation of parallel artistic or scientific worlds; it happened to Goethe and also to Paul Klee, and even to Miguel Ángel, all of them with multiple interests, penetrating areas beyond their primary art.

Any News?
A retrospective personal exhibition of oil paintings and watercolours at the Miyako Yoshinaga Gallery in Chelsea, New York, which includes oil paintings from the collection of Doctors Jay and Anita Hyman; the publication of a series of recordings using varied techniques for Goethe´s Fausto, a book of art edited by Juan José Izquierdo in ARS Liber, Pamplona; watercolours for El Diablo Ilustrado III (The Illustrated Devil part III) by Fidel Díaz Castro; a personal exhibition at the Avistamientos Gallery of Contemporary Cuban Art directed by José Busto, and my participation in Gustavo Orta´s collective exhibition Black Inks at the Miami Dade College Gallery. I am, of course, also continuing with my literary work. 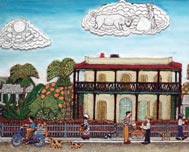