Shoes, a passion for Liudmila López

By: Mercy Ramos Photos: Courtesy of the Artist

Visual artists are inspired by many things, including the most unusual objects, letting their imagination run its course and creating magnificent work that stirs the admiration of anyone who sees it.

The talented young Cuban artist Liudmila López Domínguez is an example of that. Her inspiration is women's shoes, and they have been the theme of a countless number of works that she has exhibited in many countries.

“I began to get into sculpture in 2006, and I did it with shoes, because I have a real passion for them. It's a genetic thing, because my mom is also a shoe fanatic,” López told Cubaplus.

“My work is self-referential. To bring it to sculpture, I summarized the female body and adapted it to shoes, everyday objects that can tell you about your life, your path, your dreams, desires and sorrows, the stories of an era, a person's life…” 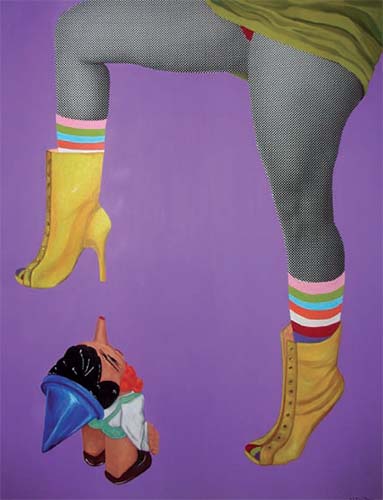 For this artist, there is nothing more important than shoes when it comes to depicting human emotion, a person's thoughts. She talks to us enthusiastically and passionately about everything that shoes can express.

“Shoes reflect my interest in continuing my discourse about gender, which involves what I can symbolically depict. This allows me to make connections between my own personal history and the collective one that are related to glamour, classes, comfort, and even states of mind.”

López is a graduate of the José Joaquin Tejada School of Fine Arts in the eastern province of Santiago de Cuba. She devoted the initial years of her career to painting, and especially to engraving. She believes that as one of the most complete techniques, engraving gave her a strong background.

“I never planned to devote myself to sculpture,” she said. “In fact, Alberto Lescay (a celebrated Cuban visual artist) told me once that I would end up being a sculptor and I answered him with a resounding ‘no.' He was right, though, because now it's almost all that I do.”

López uses material such as glass, ceramic, aluminium, papier-mâché, was, marble, resin, feathers, cardboard, leather, and bronze, and now she is experimenting with acrylic.

When asked about projects in the immediate future, she said: “I have three important projects. One in Lebensspurn, a museum in Linz, Austria, which consists of a two-metre high sculpture made with self-inking stamps made by Trodat. This makes it possible to establish a relationship between the shoeprint and the stamp.”

“I am also working on a 1.5-metre piece for the engraving conference. I am going to make it using the newspapers from all of my birthdays. And I have a project using laser engraving on acrylic for a two-person show (Causes and consequences), with Sandra Pérez at the Casa de México cultural centre in Habana Vieja, where I'm planning to make a slide that will be a giant high-heeled shoe (Birth of Freedom) between three and five metres high, so that adults can slide on it and remember our inner child.”

Rafael Consuegra: The Passion to Sculpt